Unleashing God’s TRUTH one verse at a time

In 1969 John MacArthur arrived at a small church on the outskirts of Los Angeles.  As a young pastor, his priority was simply to teach God’s Word.  One member of the congregation had concern for a couple members who were ill and not able to attend church… so they started recording John’s sermons.  That first tape contained a message titled “How to Play Church” and was the first resource produced by what would become Grace to You.

In the early years, John’s sermons were captured on large reel-to-reel recorders and all the labor was carried out by part-time volunteers.  By 1973, cassettes were circulating throughout the church and beyond. To meet the demand, one of the volunteers was hired full time.   In 1977, a few Grace to You tapes found their way on the air in Baltimore, Maryland, and… “Grace to You” radio was born.  Christian radio was blossoming into a powerful tool for feeding people’s hunger for God’s Word.

Grace to You is very vocal about their role as a ministry is to substitute the local church’s ministry.  They view themselves as an arm of support to local church congregations by providing teaching resources.  They emphasize that  media ministries can never replace a persons involvement in a biblical church, group Bible study, or interaction with a teacher. 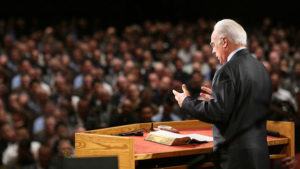 Next
Truth For Life - Alistair Begg

Yesterday Worthy Of The Gospel
September 18 Songs of Scripture – …